I am speaking today at a conference organised by the Labour Party on different models of ownership. This follows an open and substantive report on new technology and co-operative and mutual models of business in today’s economy from last year – the Alternative Models of Ownership report.

One of the manifesto commitments Labour made going into the last election was an aspiration to see the UK co-operative sector double in size.

In the co-operative sector, we are not waiting for national government and we will work with all parties in power. The Lib Dems deserve credit for backing renewable energy co-ops when in government, the SNP for overseeing a renewal of farmer co-operatives and local food in Scotland.

But the commitment by Labour, with input from the Co-operative Party, is an unprecedented recognition of the power of co-operation to spread entrepreneurial action, to harness innovation and to engage communities and workforces at a time of risk.

As the Confederation of British Industry (CBI) said recently: “it is vital that employees are engaged with and motivated by the businesses they work for and co-operatives can be a way of delivering this.” The think tank IPPR has published an excellent agenda for action to promote co-operative and employee ownership. Worldwide, Oxfam last month pointed to the way in which successful co-operatives are successful in helping to spread wealth.

It helps in Brexit times, of course, that co-operatives tend to have rooted ownership, contributing to local economies and, as pioneers of the Fair Tax Mark, believe in the values of social responsibility when it comes to paying tax.

Here is a wonderful video of one recent community co-operative, Glenwyvis Distillery, supported through the Hive Programme backed by the Co-operative Bank.

So, how would a government go about creating the conditions for that growth?

The co-op sector itself has developed its own bootstrap ambitions and actions under the theme of Do It Ourselves in the form of a National Co-operative Development Strategy. This recognises that growth is of value if it is growth not just in turnover, but the growth of people’s participation and the spread of values of equality and sustainability. It also looks at examples of successful co-operative sectors across the world, in research by the Co-operative College. Regions such as Basque Spain, Emilia Romagna in Northern Italy and countries such as Finland, Brazil and Switzerland benefit from a ‘co-operative effect’.

On the back of this, I will suggest that there are four key steps for policy action to accelerate co-operative action. 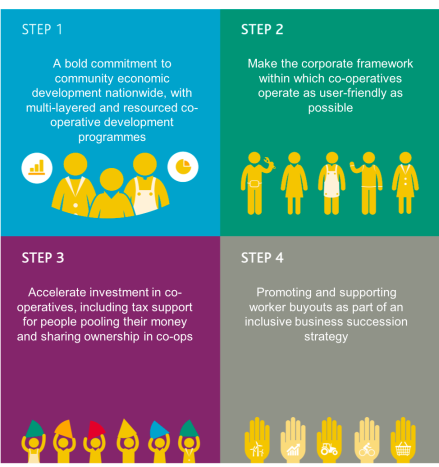 This is an open conversation, not limited to our sector or to any one brand of politics. It is a good time to imagine what our economy could be.

What are your ideas?

One thought on “How to double the UK co-operative sector”