Information is power. Governance is control. So what do you do if you want a democratic system of decision making and a distributed system of power?

The paradox of hierarchies is that the more layers there are, the poorer the information that results, whether it is lost in the noise, not shared or distorted. Shann Turnbull has estimated that loss at 98% in an organisation with five layers of hierarchy. There is a case therefore that democratic governance, networked governance, can do better. 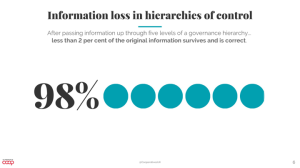 The co-operative model is a proven model of business, based on principles of economic participation – ownership is by people involved in the business – and equality – member owners have an equal vote.

But, as it happens, we don’t have a systematic and cross-cultural account of how governance works in practice. We have been working on that, with research by Johnston Birchall on large co-operatives and in the coming week, we are running a deep dive workshop on co-operative governance in the Netherlands with sister networks from Holland, Sweden, Denmark, Finland, Belgium and Germany.

At a recent roundtable in Westminster, convened by Graham Allen MP,  I listened to Professor James Fishkin, Director of the Centre for Deliberative Democracy in the USA. His recent book, Democracy when the people are thinking, talks about distinct forms of democracy, including:

The co-operative models of democracy, particularly at scale, have leaned traditionally towards the representative model. But this is changing. Participatory practice – everyday democracy – and deliberative and open models around strategy and innovation are on the rise.

At a personal level, I have learned a huge amount in my time as Chair of Involve, the democracy charity – time which is coming to an end as we look for new trustees and a new Chair.

My contribution to the workshop this week is to give this presentation, now up on Slideshare, on Information Design in Democratic Governance – ten steps towards a richer conception of governance in a co-operative.

The governance design at Rochdale Boroughwide Housing is a great example, using information in a liberating and participatory way.

As the late Paul Hirst said “democratic governance does not consist just in the powers of citizen election or majority decision, but in the continuous flow of information between governors and the governed, whereby the former seek the consent and co-operation of the latter.”