I have been at an event this week in Rochdale Town Hall to mark the work over 100 years of the Co-operative College.

Education has been a principle of co-operative action throughout and the combination has been an extraordinary accelerator over time for working class talent.

What pictures of cooperation would you choose? I’d be interested to learn.

Here is the one that I picked, one that I saw first hand in an exhibition at the National Gallery London in 2015. 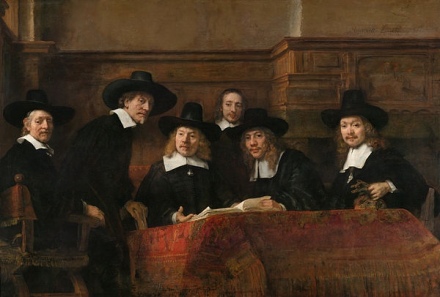 This oil painting, The Sampling Officials or The Syndics, is one of Rembrandt’s group portraits – think also of the Night Watch and the Anatomy Lecture. It was painted in 1662, so it is one of his later works.

These are elected officials of the Drapers Guild. It is their job to check the quality of cloth produced through the guild.

For me, this is six portraits in one. But it is also one portrait, of a group in harmony.

There is tranquility in the picture, emerging from the composition Rembrandt has used. Look at the way that three horizontal lines suggest balance, the table through to the arm of the chair, the dominant level of their heads and the top of the panel on the wall.

There is colour and texture, light and shadow.

Equal importance is given to each person, the servant in the centre and the five officials. Each has a personality that comes through. Each is lit; as always with Rembrandt he uses light to tell us where to look.

The traditional interpretation of the painting is that the officials are on a platform before the assembly of the Drapers’ Guild and they are giving the assembly – us the viewer – an account of the year’s business. In short, it is a co-operative AGM.

The guilds can be thought of as mutual associations with members and typically a degree of internal democracy. In my book A Short History of Cooperation and Mutuality, free to download, I point out how these early forms of co-operation also underpin the art that we value today.

The word masterpiece – in origin – means a piece of work produced by a member who wanted to be rated as a master of their guild. The Dutch Masters were literally masters: painters who were organised into entrepreneurial guilds. The patron saint for artists was St Luke. But with church patronage in decline in the Low Countries, in Calvinist times, the Guilds of St Luke turned instead to domestic customers, developing an extraordinary market for art.

By the time that the Sampling Officials was painted, 45,000 paintings were estimated to hang on the walls of homes in Delft.

Rembrandt’s painting was commissioned by the Drapers Guild and hung behind this platform, in their guildhall for one hundred years. It is a projection of what the guild is, an act of co-operative education from the day it was hung for all who are part and who join. Through quiet co-operation, you can be immortal.

So, if you want to be immortal, I’d encourage you to explore and perhaps even to master the art of co-operative education.